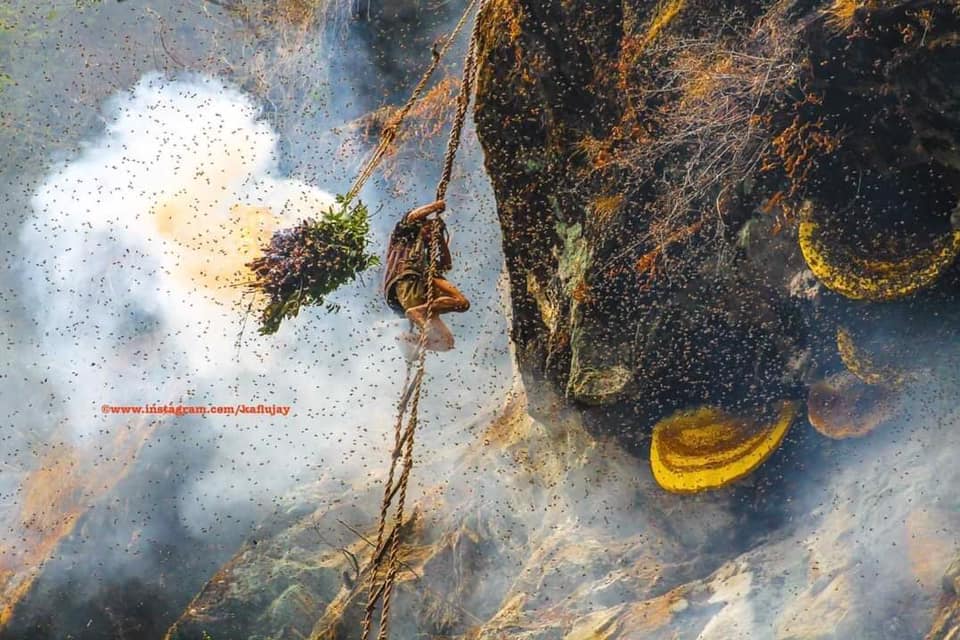 These are the biggest honey bee breeds in the world. As the source of this honey is the pollen of Rhododendron, coloration varies primarily based on the bee forage and age of the honey; that consists of red, orange-yellow, whitish crimson, and dark brown. Mad honey is widely recognized for its hallucinogenic, toxic, anti-cancer, aphrodisiacal (thrilling sexual desire), dietary, and one-of-a-kind medicinal value.

The bee forages on the Ericaceae family of Rhododendron, which contains a freaky chemical compound called “GRAYANOTOXIN,” including Tropane alkaloids. They collect the nectar from these species of flowers and store them. Thus, the compound facilitates the hallucinogenic property in the mad honey.

It is said that mad honey was used as a weapon for mass destruction for invading armies. In history, the presence of mad honey was first mentioned in 401 B.C. by Xenophon, an Athenian author, and military commander.

He described how his troops were poisoned by mad honey, who was heading back from a battle in the Turkish province to Persia. Later in 67 B.C., under the order of General Pompey, the Roman soldiers invaded the Black Sea region intending to capture Turkey but the admirers of the existing King Mithridates of that time covered their whole path with Honeycombs of Mad honey.

At that time, the soldiers who started their journey from one place to another used to rely on the food available in the forest, and the soldiers consumed those honey. In this way, Roman troops were poisoned by mad honey.

After the 18th century, the honey was deliberately harvested as many health benefits were detected. Later, people begin to sell the mad honey at a comparatively higher price than that of normal honey as it is one of the rarest honey in the world.

Things to be cautious about before consuming mad honey:

The mad honey should not be taken more than one tablespoon within the span of 24 hr. One tablespoon is enough to do wonders to your body as it is equal to 60 calories and also due to its strong effect.

The children below the age of 10 shouldn’t be given to consume it. It shouldn’t be taken with alcohol as honey itself has a strong psychedelic effect. Also, after consuming this, honey doesn’t try any other hallucinogenic product.

There is this saying, “If you take too much medicine, it becomes poisonous.” It is the same with mad honey as well. The consumption of mad honey more than one tablespoon results in poisoning, i.e., honey intoxication.

The intoxication is due to the compound called Grayanotoxin. The symptoms of poisoning are seen after 2 minutes to 3 hrs. The symptoms include Vomiting, Dizziness, Nausea, Salivation, Lacrimation, Urination, Defecation, Gastrointestinal distress, low blood pressure, and a drop in heart rate. In the case of high doses, the person might die as well. However, there are only a few death cases.

As described by Justin Brower, a forensic toxicologist, the Grayanotoxin binds with voltage-gated sodium ion channels in the cells located in the membrane of neurons. Thus, this results in depolarization wherein the sodium is freely flowing in the cells, and calcium is increasing.

There are around 18 different forms of Grayanotoxin, and not all of them have a toxic effect. Grayanotoxin 1 is responsible for cardiovascular disease resulting in A.V. block, Grayanotoxin 2 is less than any other grayanotoxin, and Grayanotoxin 3 causes arrhythmia( all this happens when taken excess than required; otherwise, it has proven to be beneficial for many problems including heart diseases).

The Grayanotoxin present in the Rhododendron not only affects the life of humans when taken in large amounts but also results in the death of honeybees. Some bees do not have resistance to it, so when they go to collect nectar in such flowers, they tend to die.

There is no such test that reveals the level of Grayanotoxin present in the body, and it also doesn’t have a lab for testing grayanotoxin intoxication, but; it can be diagnosed with the help of a history of intoxication and symptoms. As soon as the symptoms start showing up, the patient should be given saline infusion and atropine. This has helped in many cases, to reduce intoxication.

As intoxication also results in heart block, in a few cases, a temporary transvenous pacemaker was required. Also, in some cases, if saline infusion and atropine aren’t enough, then Advanced Cardiac Life Support (ACLS) bradyarrhythmia protocols are required; dopamine infusion and transvenous pacing are suggested. However, as per the reports, intravenous saline infusion or after normal saline infusion with atropine sulfate has cured many patients. Thus, there should be constant supportive care with electrocardiographic monitoring. The complete recovery may take 6 to 24 days.

The expiry date of mad honey:

Archaeologists have found out that 3000-year-old pure honey in the Egyptian pyramid is still edible, which means that the pure mad honey has no expiry date. However, the hallucinogenic property differs according to time. It is at a peak at the time of harvest, and the hallucinogenic property decreases over time. However, the medicinal values don’t decrease by the time; it remains the same. The color of the honey changes gradually into dark black as time passes. People store it for 1 to 5 years and consume it. As the honey we ship at your door is the purest version, it carries no expiry dates.

We will send you interesting contents about mad honey over newsletters.